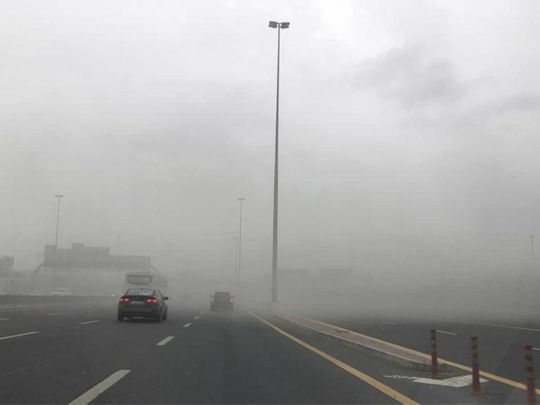 Dusty weather and poor visibility on Abu Dhabi roads will continue on Sunday. The UAE’s National Center of Meteorology warned: “Fresh to strong Northwesterly winds with a speed reaching 55 km/h, causing blowing dust and sand, reducing the horizontal visibility to less than 2000m at times over some areas especially westward, from 8am until 4pm on Sunday.”

Additionally the NCM said that motorists in Al Ain will see visibility drop to less than 1000m.

“A chance of fog formation with deterioration of horizontal visibility to no visibility at times over some internal areas especially eastward from 4:30am until 8:30am.”

The NCM said that the western parts of the country will see dusty and partly cloudy weather. “Moderate to fresh winds, strong at times over the sea, will cause blowing dust and suspended sand,” the NCM added.

The weather bureau also said that a significant drop in temperatures was expected on the first day of the week.

Coastal regions of the country will see maximum temperatures between 24 – 29°C. Temperature highs in the internal areas will 27 – 33°C and 18 – 24°C in the mountainous  regions.

Relative humidity will reach a high of 80 per cent.

The NCM also warned that the sea in the Arabian Gulf will be very turbulent at times, whereas the Oman Sea will ne moderately to slightly rough.

Another day of Abu Dhabi's International Holding's stock zooming up