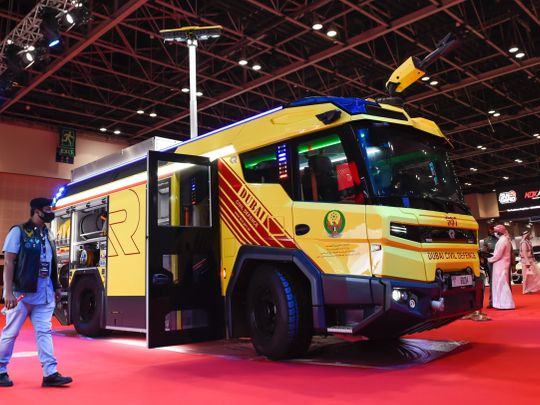 Dubai: Dubai Civil Defence inaugurated its first fully electric fire engine in the region during an event at the World Trade Center here.

The truck is fully powered by electricity and its faster and more efficient than regular fire engines.

Civil Defence Director Major General Rashid Thani Al Matroushi said the state-of-the-art truck is 20 per cent faster than the regular ones and it takes less than one hour to fully recharge it. The vehicle can run for approximately 500 kilometres on one full charge.

“It is 30 per cent more efficient than the regular ones and has a control system to connect it directly with the command room. Six firefighters can be on the truck and it is environment friendly, manoeuvrable and safe,” said Al Matroushi during the opening of Custom Show Emirates.

“The truck is part of the smart system of trucks and machines based on highest standards of safety and firefighting. It will develop our key role in saving and protecting lives and properties,” Al Matroushi added.

The new revolutionary technology has been developed by Rosenbauer Group, one of the world’s three largest manufacturers of fire-service vehicles and firefighting equipment.

The truck has pressure outlets in front and on both the sides with a tank volume of 4,000 litres and with 300 litres of foam compound. It has a quick recharge system that can reach 80 per cent charge in 40 minutes. “The vehicle has four cameras and a device to measure the level of water and foam in the tanks. It can operate between six and eight hours,” Al Matroushi added.